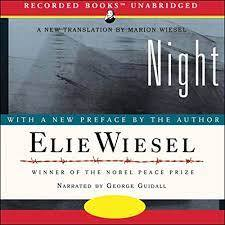 Finished reading ‘Night’ by Elie Wiesel over the weekend. Normally, I am a lazy reader, taking days and months to go through a book, but this slim book I could devour within Saturday and Sunday. It was so absorbing, so unputdownable.

The book is a chilling account of the atrocities perpetrated on Jews by Nazis during the Second World War. It is difficult to imagine that cruelty of this nature was actually perpetrated by a section of people less than a century ago. One wonders why the world, with all its collective might, could do nothing to stop the madness.

And how could followers of Hitler be so heartless? Time and again, humans have displayed the propensity to touch new heights of cruelty. Most of them are often ready to go to any extent to please the masters they follow. They are capable of rationalizing the most irrational action. They are more than ready to become assassins if they themselves are not in danger of being assassinated.

‘Night’ is a tale plainly told. There is no attempt at decoration or philosophizing. The author has described things so vividly that the reader feels, he is watching the atrocities being perpetrated.

As you race through the book, you hear the moans of the dying louder and louder. You see people being shot, thrown into furnaces, trampled under feet. You see families being ruthlessly torn apart. You see people begging for food and water. You start feeling that death is not too bad after all. It can sometimes liberate you from all the sufferings a cruel world can inflict upon you.

Read ‘Night’ only if you are ready to sacrifice a few nights of sleep. Images will haunt you and fill you with hatred for those who committed the atrocities and those who failed to stop them.

When we meet someone

Who has lost a close one.

Why always look for words

That are often futile,

A simple hug sometimes does

What a thousand words cannot do. 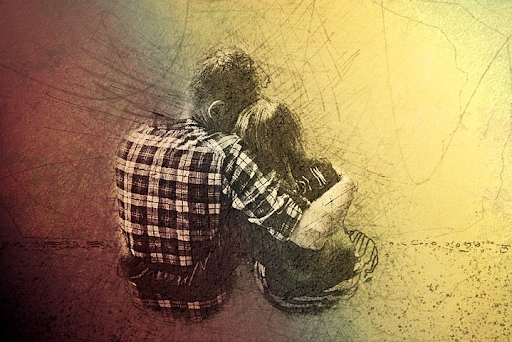 200. Stories on Satras of Assam

Assam has a rich tradition of Satras which are religious-cum-cultural centres related to Vaishnavism. A Satra has its hierarchy of administrators like Adhikars, Deka Adhikars, etc.
Recently, I read four short stories, written by the celebrated Assamese writer, Dr. Laxminandan Bora on Satras and their administrators. The stories are short, but extremely powerful. They bring out the struggles which young administrators of Satras sometimes face. There are certain expectations from them as administrators of Satras, but their own convictions and emotions as human beings may come into conflict with these expectations. The stories beautifully highlight such conflicts.
Dr. Bora is a recipient of Sahitya Academy award. While reading his stories, I had a feeling of reading something totally original and different. My conviction that the Assamese literature is studded with shining jewels got reinforced . Alas, people outside are not much aware of this richness.
I think, there should be large-scale translation of Assamese literature so that lovers of literature from other languages can taste the nectar. Maybe, some day, I will also try my hands at translating a few pieces from Assamese to Hindi and English.

199.How tourism destroyed a Spanish village

During the lockdown, I finished reading ‘Voices of the Old Sea’ by Norman Lewis. The novel is all about how life in Farol, a remote fishing village of Spain, changes due to tourism and rampant commercialization. The process is spurred by corruption, money and muscle power.

Initially, the village is fully dependent on fishing, but tourism brings it to a point where fishing becomes almost non-existent, leaving the villagers worse off. They have no free time, their age old values are under attack and the social fabric of the village is destroyed. The impact of tourism on the village is brutally summed up by the Alcalde, a character in the book, who hopes for return to the old ways, ‘It’s a kind of sickness, an infection. In the past, we suffered from the plague. Now we suffer from tourists, but like any other sickness, it dies out in the end.’

In quest of peace and solitude, the author spends a few months in the village during three consecutive years. He becomes one with the villagers to observe their lives closely and understand their ways. His account of the village life is vivid and authentic. He is a mute witness to the transformation of the village.

While reading the novel, one is often reminded of some remote Indian fishing village with limited and unpredictable sources of income and its share of superstitions.

One requires some patience to complete reading the book, primarily due to the use of uncommon and difficult words. However, the book becomes more and more readable and interesting as one progresses.

On the back cover of the book, there is an interesting review by the Observer. It says, ‘After the war, Norman Lewis returned to Spain and settled in the remote fishing village of Farol, on what is now the Costa Brava. Voices of the Old Sea describes his three successive summers in the almost medieval community where life revolved around the seasonal sardine catches, the Alcalde’s bar and satisfying feuds with neighbouring villages.’

It is interesting to note that feuds with neighbouring villages can provide the necessary satisfaction, excitement and anticipation to an otherwise bored population with a lot of spare time and nothing much to look forward to. True, some requirements of existence can be effectively met by exciting feuds and not by monotonous harmony.
Posted by Onkar at 5:54 AM 3 comments:

198. Use of teeth as ornaments 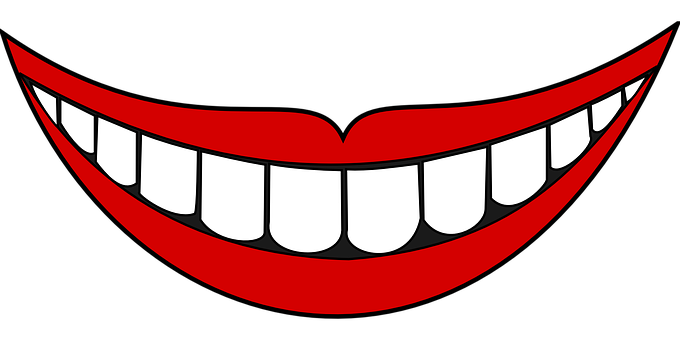 I read an interesting report in newspapers recently. In Turkey, excavators have found two 8500-year old human teeth which were used as pendants. The teeth had been intentionally drilled to enable them to be worn as ornaments. These showed signs of wear and tear, indicating prolonged use as ornaments.

The news is quite encouraging for people with tooth problems. They can now hope to ask their dentists to keep their extracted teeth and give some discount in bills. May be, teeth become so popular as pendants that dentists start paying those who need extraction. Dentists can then double up as sellers of pendants and may have tie-ups with jewelry chains. Patients may also insist on return of their extracted teeth so that they can sell the same later when prices go up.

May be, people who can keep all their teeth intact in old age will be considered wealthy. They will have the satisfaction of leaving a lot of wealth for their children when they die. People will say that so and so died, leaving 32 teeth behind for his/her children.

Possibilities are immense and exciting. Ladies must sit up and take note. A new era of fashion is knocking on their doors. They must get ready to arrange some teeth from within or outside their families to be able to catch up in time.
Posted by Onkar at 2:59 PM No comments: 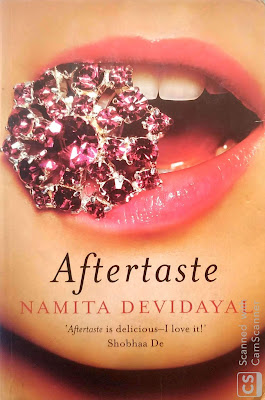 Another book that I finished reading during the recent situation in Guwahati was Namita Devidayal’s ‘Aftertaste’. This is the story of a big business family in which money, ornaments, food and other materialistic things run supreme. There is little attention to relationships. The strong lady, who holds this world together, ultimately finds herself on her death-bed with all her children wishing her to die for different reasons.
The novel is very deliciously written and individual stories of different characters have been lucidly woven into the overall narrative without wires getting entangled.
‘Aftertaste’ is a novel you will find difficult to put down. I think, Namita Devidayal is an underrated author. She is far far superior to many Indian writers who have become famous for nothing.
If you want a simple story to which you can relate and which does not demand too much of intellectual grappling on your part, go get a copy of ‘Aftertaste’. The taste will linger much after you have finished reading the book.
Posted by Onkar at 1:08 PM 1 comment: 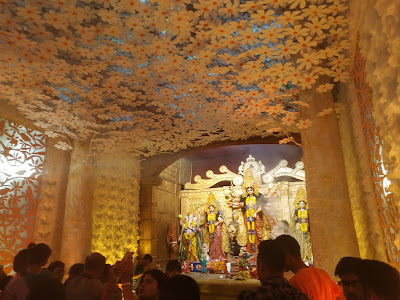 Hundreds of Pooja pandals have come up in Guwahati. Wherever you go, you find a pandal with tastefully decorated idols of the Goddess Durga and others. Lights and decoration tell you from a distance that a pandal exists nearby. Crowds start swelling late in the evening with families hopping from pandal to pandal up to wee hours in the morning. Some pandals are so crowded that one has to summon all courage and strength to enter. 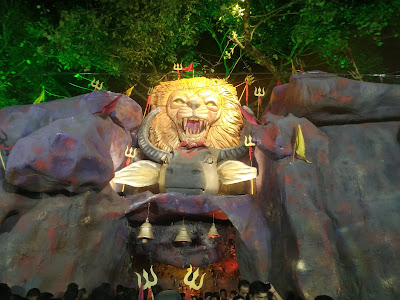 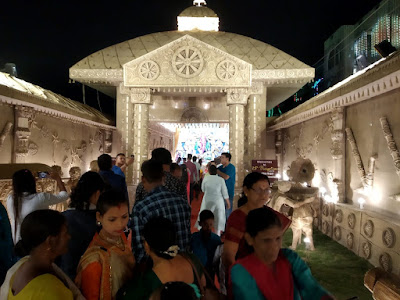 Durga Pooja is truly a people’s festival in Assam. Involvement of entire communities irrespective of caste, creed, religion and language can be seen. Everyone partakes of ‘Khichari’, a mix of rice and pulses which is offered to the Goddess.
The festivities give a chance to local artists to exhibit their skill to the fullest. Many pandals are built around specific themes like space achievements of the country and environmental pollution. Some pandals are so imaginative, creative and beautiful that words fall short in describing them. One feels that the artists of the region, if given proper support, can rise very high in their profession. 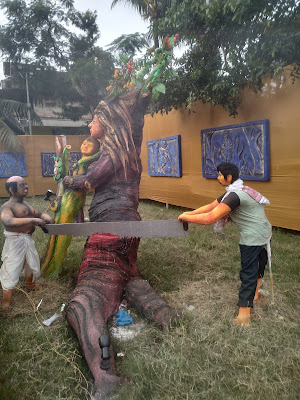 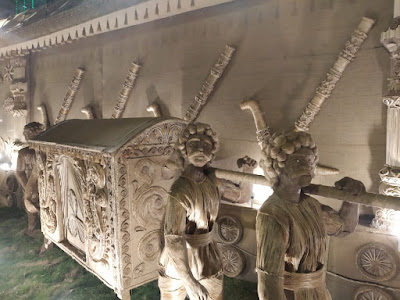 What I missed this year was the famous moving theatre of Assam. During my childhood days, moving theatres used to be an essential feature of Pooja festivities. We used to see plays, staged by them, on all the four days of the festival. The troupes used to go from place to place to stage plays. It saddens me to find that the moving theatre tradition in Assam seems to be on decline.
Posted by Onkar at 10:44 AM No comments:

195. On demise of Sushma Swaraj

After Shiela Dixit, it is Sushma Swaraj. The news of her death came so suddenly. Just a couple of months back, when she attended the swearing-in ceremony of the Narendra Modi Cabinet, she appeared to be in perfect health, taking strong and confident strides. Death sometimes strikes silently, leaving us totally unprepared and therefore, more devastated.

Like Shiela Dixit, Sushma Swaraj was dignity personified. One never saw her losing cool and behaving in a mean manner. A smile adorned her face even in the most trying circumstances. This is one of the biggest qualities of a leader.

Her Parliament speeches are perfect examples of top-class oratory. Whenever she spoke, she appeared fully prepared. Sushma Swaraj put across her points extremely well without raising the pitch of her voice. Her command over the Hindi language was exceptional. Undoubtedly, she was one of the best speakers of our time.

I remember her media handling as I&B Minister and also as Health Minister. I particularly remember her press briefing when there was a serious bird flu situation. Her handling of media was deft. She always had a lot of friends in media and perhaps, no enemy.

As External Affairs Minister, she had the image of a very caring politician. She would quickly respond to any call for help on Twitter. She was a pioneer in using social media as a potent medium of grievance redressal. So many common people were beneficiaries of her alertness.

India has lost two women of remarkable character in quick succession. Their departure has left the political class much poorer.
Posted by Onkar at 9:59 AM 3 comments: