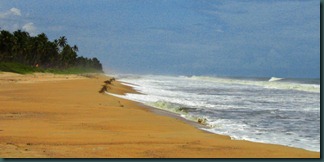 If there is one place where I don’t get bored, it is beaches. It offers so much variety, so much turbulence and so much tranquillity that time just flies.No two beaches are the same and no two days on a beach are the same. 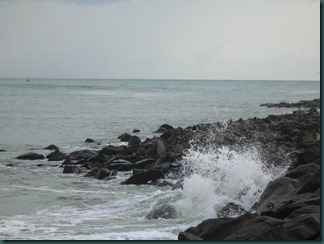 Recently, I visited some beaches near Mangalore. I hardly felt like going anywhere else. Taking long walks, exploring the vegetation nearby,feeling the waves on my legs with an occasional wave surprising with its height and catching me unawares, looking at seaweeds and oysters brought to the shore by the waves, small boats going up and down the waves in the distance, revellers enjoying themselves in their own way – there was no dearth of activity. 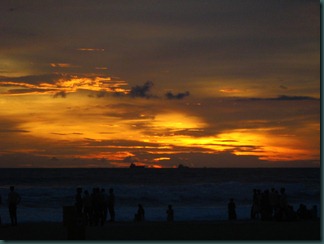 What struck me particularly was the changing colours of the sky over the ocean. With the sun preparing to set , the sky appears to be so beautiful. Sometimes, the sun goes behind the clouds, sometimes partially comes out, sometimes just peeps through the clouds and sometimes fully dodges the clouds. Each action presents a different riot of colours on the horizon. After the sun sets, the colours are much more beautiful. One can spend hours, simply looking at the changing colours of the sky.

On the beaches, I also feel very humble. The ocean is so mighty and vast that the vanity of a human being simply vanishes.

These pictures are awesome.Just like you i too love beaches.While my husband wants a dream cottage in some hilly area ,i want mine to be near a beach .

Have a nice week !

Nice photos. I liked the last line. I get the same feeling when I stand by the sea.

wonderful images especially the last one ! I am crazy about beaches :)